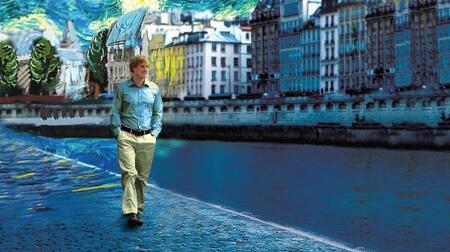 A year or so ago I wrote the following blog piece after seeing Woody Allen’s romantic homage to the City Of Light – “Midnight In Paris”. It turns out that the composer of the theme song and much of the soundtrack for the movie, French-born jazz guitarist Stephane Wrembel, will be coming to San Diego to perform at dizzy’s with his quintet on Friday, July 20. The show will be held under the stars in the outdoor garden courtyard of Old Town’s Cosmopolitan Hotel. Click here to listen to his evocative theme song “Bistro Fada” on youtube while you revisit my thoughts:

I saw Woody Allen’s misty “Midnight In Paris” the other day . . . those gorgeous shots of rainy Paris streets made me recall my own nocturnal ramblings down those ancient narrow cobblestone streets . . . thru les halles – 3 AM – wandering in pursuit of that relentless energy . . .
It’s a cool film, full of classic Woody-isms, like when Gertrude Stein advises the protagonist “The artist’s job is not to succumb to despair, but rather to find an antidote for the emptiness of existence.” And I was captivated by his concept of how, no matter when we live, we seem to draw pleasure and inspiration from creative scenes a generation or two before ours.
As some one who came of musical age in the 1960′s, I often daydream about the jazz scene on 52nd street in the late ’40s (Bird, Prez, Diz) and the beat scene in the early ’50s (Kerouac, Cassady, Ginsberg).
The question Allen raises is, why do we feel our own generation is empty and dull, without imagination? What makes us gravitate to what is fixed in legend and lore? Could it be because those times are safe and static? Because they can’t change on us?
Woody’s answer is that the present is unsatisfying – because life is unsatisfying. We need to get rid of our illusions, to open our eyes and search for the sparks flying right now. To hear the rumble of creative energy going on around us this very instant, to snuggle up close and actually be a living breathing part of it.
I’m all for that.