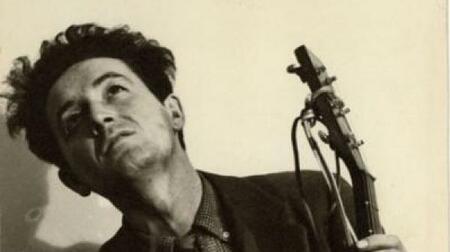 Woody Guthrie would have been 100 years old today. He was the prototype rebel folk singer/songwriter, who traveled with migrant workers from Oklahoma to California, busked the streets and campfires, rode the rails with the hobos, and all the while wrote 100’s of songs that spoke to and represented the viewpoint of the working class. If you don’t know his music, check out Hard Travelin’, Do-Re-Mi, Hobo’s Lullaby, So Long-It’s Been Good To Know You, Pastures of Plenty, and, of course, This Land Is Your Land.
He also singlehandedly documented and transformed the traditional folk and blues songs he found along the way into songs of and for the common people, showing them how to live and how to stand up for themselves no matter their place in life. His is a great legacy, saturated with realness and humanity – one that paved the way for others like Ramblin’ Jack Elliot and Bob Dylan.
Here’s one of my favorite Woody-isms, as true today as when he first said it:
“Life has got a habit of not standing hitched. You got to ride it like you find it. You got to change with it. If a day goes by that don’t change some of your old notions for new ones, that is just about like trying to milk a dead cow.”

Listen To down to bone (demo)