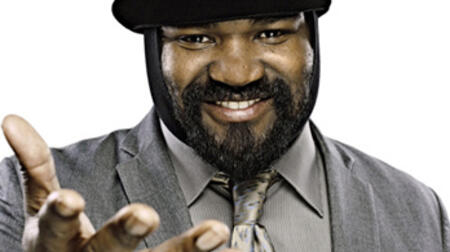 I’ve been bingeing on “Be Good” – the new album by soul jazz vocalist/songwriter Gregory Porter, listening to it over and over. The man has a sublime voice, resonant and real. Big in stature, he uses his body as his instrument, raising his sonorous tones from deep within, rolling them around and letting them escape all warm and full.
There is an honesty about his music that I love. He sings with sincerity and conviction, seeming even more relaxed and in control than he was on his Grammy-nominated 1st album – 2010’s “Water.” That’s no doubt due to the consistency and familiarity of working with his exceptional band. They tune into him, and he rides their grooves majestically. Together they make music that is in the moment, alive and powerful. Charismatic.
There’s a touch of his time in San Diego that also seeps through both of his albums, most notably in the production, playing, and arrangements provided by the immeasurably talented Kamau Kenyatta.
I have some favorite songs, to be sure:
I love Be Good, a tender waltz about how giving your heart away can sometimes hurt.
On My Way To Harlem is a cooking description of the organic-ness of his musical journey
And Bling Bling where his short shotgun scat staccato signals some smoking solos from his solid band.
The album closes with an understated a cappella version of God Bless The Child that is beautifully mesmerizing.
So if you haven’t had the pleasure, check Gregory Porter out. You’ll be glad you did.
You can hear the song Be Good here