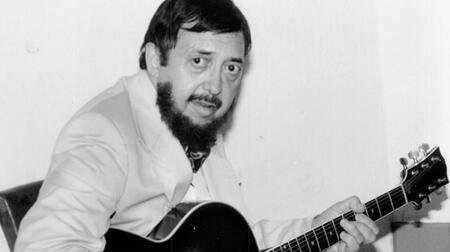 (This is an article I wrote for Jazz News 14 years ago, in April 1998. I’m bringing it back to remind us all of this man’s prodigious talent. We sure miss you Barney!)

Barney Kessel turned 74 last October 17th. Since he started performing at the early age of 14, leaving school after the ninth grade, that gives him 60+ years of living the musical life; years filled with a pronounced sense of humor, an insatiable hunger for knowledge, and a love for the living and creating in the moment that is “jazz.” I had the remarkable opportunity to spend a Saturday with him a few weeks ago. Of everything we talked about, his concept and definition of what jazz actually is made the most impact on me.
For Barney, jazz has nothing to do with scales, licks, riffs, or runs. It is instead a way of hearing music that starts in the essence of a player, travels to his brain, and then just comes out his instrument. If it doesn’t happen this way, then to him it’s not jazz. As we listened together to his personal stash of unreleased live performance tapes, it became obvious to me that Barney relished being in the zone where he did not know what was going to happen next. As a guitarist, I could hear it in his playing; it wasn’t a collection of pre-planned worked-out parts, rather he constantly challenged himself to express what he heard at that moment. One note would suddenly lead to a staccato of single note bop; then two notes played together would flourish into gorgeous chords. So pervasive is his knowledge of his instrument that this stuff, this jazz, just happened; not, of course, without work and discipline. He proudly recounts that from his 16th thru 68th birthdays, he practiced at least 5 hours every day that he didn’t have a gig and 3 hours when he did – EVERY DAY except for 17 days in that 52 year period. Can you imagine being able to keep count of the days you didn’t play? “What happened on those days, Barney?” He replied that he was most likely traveling, on a plane, and it was just impossible to play. I don’t know for a fact, but I imagine those practice sessions were approached with an attitude consistent with the way he performed. He played jazz; he simply tuned in, turned himself loose, and let what happened happen. That is the awesome gift a true jazz musician enjoys, and Kessel is surely that.

What’s more, Barney was probably one of the funniest performing jazz musicians ever. He was blessed with that dry Oklahoma/Nebraska plains wit that also surfaced in Will Rogers and Johnny Carson. And humor being incongruity, there’s much humor in his playing: where his mind goes and how it gets there. But it was in between his songs, in his introductions, that he had you breaking up with laughter. He did the same thing he did with the guitar, he simply turned his mind and mouth loose. And, as in his playing, his timing was impeccable. Listening to those live tapes, I was right there in the moment, cracking up. So was Barney, twinkle in his eyes, amazed at what comes out of himself as any real artist always is.

His career in jazz has taken on legendary status: he has seen it all. Devoting his life to jazz during its fertile renaissance, he has known, grown, performed and recorded with the greatest. But does he live in the past and aggrandize the history? Far from it. If you ask him, he will be candid about the reality of living, interacting and performing as a jazz musician, and the compromises many of his peers made. He will also not hesitate to recount the Kessel priorities in life, forged in part by his agrarian Oklahoma upbringing.
Let me give them to you in his terms:
Of first importance is my relationship to God, this above all drives my life.
Second is my relationship with Phyllis, my wife. She is so loving and good, there for me all the time, and is the single most important person in my life.
Next come all my friends and relatives.
Fourth, all the other people living in the world
Then comes my country, the USA, (the ideals and principles embodied in the Constitution and Declaration of Independence).
Sixth, comes jazz and classical music.
And seventh comes the guitar.

Truly one of the giants of the jazz guitar, no one will dispute his enormous influence on every guitar player who came after him. You can find the pertinent facts in any jazz dictionary. Instead, let me tell you that Barney Kessel is alive and living in beautiful benign San Diego, the anchor for a burgeoning scene that includes Mundell Lowe, James Moody, Charles McPherson, Mike Wofford, and many, many others. He is positive and happy even though a stroke in 1992 made it so he can no longer physically play the guitar. He still teaches and shows up at clubs and concerts, supporting his friends, always accompanied by his loving wife Phyllis. Let me also assure you that the stroke doesn’t stop him from creating music, because his mind is as sharp as ever, and every time he hears a melody, deep within him the jazz begins. The rest of us are the unlucky ones. We no longer get to partake.

check out Barney in action here