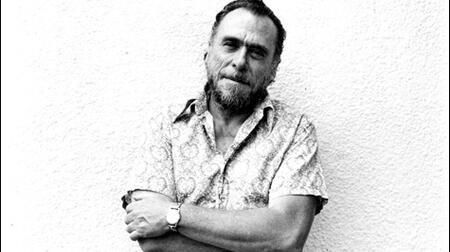 Good writers have a way of cutting through the crap and reconnecting us with the rhythm of existence.
I don’t know how familiar you are with the work of Charles Bukowski, but I’m going to share a little blast of his vitriol because I think we all could use a good slap in the face right about now.
What’s happening in today’s instantaneously competitive wrap-around world – I’m talking about the ruthless emotional jockeying that’s going on – seems to be making so many people brittle and subtly bitter. You can tell by what comes out of their mouths. It may be some meaningless pablum about the altruistic cause of the day, but it appears as a hungry, hopeless snarl.
Yeah, life is rough, but it’s happening right now, and it’s all we’ve got. We need to remind each other to stay focused. Don’t let the system crush you.
So, in that spirit, here’s a little shot of Buk. I’ve cobbled together some quotes and changed a couple of tenses for effect, but they’re all his words:

“Frankly, I am horrified by life, at what a man has to do simply in order to eat, sleep, and keep himself clothed. So I stay in bed and drink. When you drink the world is still out there, but for the moment it doesn’t have you by the throat.
The problem is you have to keep choosing between one evil or another, and no matter what you choose, they slice a little more off you, until there is nothing left.
At the age of 25 most people are finished. A whole goddamned nation of assholes driving automobiles, eating, having babies, doing everything in the worst way possible, like voting for the presidential candidate who reminds them most of themselves.
We’re all going to die, all of us, what a circus! That alone should make us love each other but it doesn’t. We are terrorized and flattened by trivialities, we are eaten up by nothing.
What is terrible is not death but the lives people live or don’t live up until their death. They don’t honor their own lives, they piss on their lives. They shit them away. Dumb fuckers.
Most people’s deaths are a sham. There’s nothing left to die.”

Listen To Sometimes it's easier to kill somebody else