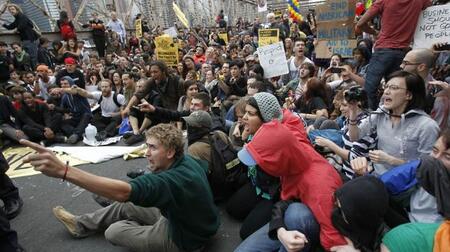 The state of education in this country is ludicrous. Our colleges and universities have become nothing more than finance factories — educational Wall Street investment houses — jockeying for image and position, marketing themselves ad nauseam, lobbying and grubbing for government subsidies and research funding, growing immense endowments, all but abandoning their alleged mission of developing young impressionable minds. With their dubious enrollment quotas and escalating costs, they have grown out of reach for anyone solely interested in learning. Of course, all of this chasing the dollar hocus pocus goes on quietly behind trustee board room doors, under the guise of “the mantle of higher education.” But for a telling indication, just look at how they deal with their student athletic programs. The sports pages are full of stories detailing the mad stampede, the aggressive maneuvering, the game of musical chairs, currently taking place in the nation’s collegiate athletic conferences. The money involved in these so called “educational endeavors” is mind-boggling. And you can bet the corruption is too. And guess who doesn’t get any of this? The student athletes or, for that matter, the student bodies themselves. Oh there’s token scholarship aid. But I guarantee that none of this is done with the interests of the students in mind. It’s money money money, all controlled and driven by the self-serving quest for building bigger and bigger endowments.
By the way, where is the transparency on where this money goes and how it is used? A big portion of it goes to excessive compensation and bonuses for school presidents and administrators. How is this different from Wall Street banks and brokerage houses? It isn’t. It’s just more schemers looking out for themselves, done under the guise of, and paying lip service to education.
Have you ever spoken to someone who works or teaches at a university or college? Do they refer to their job as a blissful rewarding experience — a scintillating, passionate quest for knowledge, discovery, and open free interaction with eager students? It might be for a small few who are wise enough to be able to block out the games. Most of the ones I talk to are frustrated, bitter, harried by clueless administrators in an uber competitive tenure-driven environment where, because it begets funding, they’re forced to publish like penned geese driven to produce intellectual foie gras. Not to mention the gamesmanship and personality conflicts that leave most of them holding on for dear life, fearful about their position, relegated to focusing on lining up pension and compensation packages so that they can one day retire, free at last – having pissed away any passion they had for their field of knowledge.
It’s just like Wall Street. Sad.
Any wonder why today’s students are frustrated and out in tents in the streets? My heart goes out to them. They borrow, mortgage their future, to play the education game that everyone tells them is required – all the while realizing that there may not even be a decent job waiting for them when they’re finished. We are the ones who have led them astray and screwed their lives by creating this mess. I’ve got to take responsibility for my generation. We touted ourselves as the dreamers of dreams for a better society when we were in the streets back in the 60’s. But we have sold out, abdicated our ideals and traded them in for self serving lifestyles filled with scheming and self aggrandizing. We have made an aggressive financial game out of almost every aspect of modern life. The state of everything in this country has gotten so hyped, competitive, and pushy that any and all attempts to bring it under control end up as merely rhetoric. Nothing is changing. We are living our own hell.

Listen To The Big Race