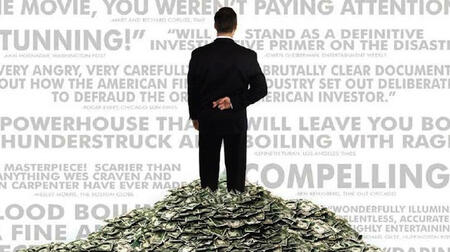 So I finally made time to watch “Inside Job” last night. It was the scariest movie I’ve seen in a very long time. Like those films where you are forced to live thru scene after scene of unspeakably horrible, stupidly sad experiences, and then at the end when you’re thinking “ah, but I somehow made it through relatively unscathed” – you find out the same people that did this to you are still there, unharmed, nothing’s happened to them. In fact, some of them are in control, running the show right now! Holy shit!
How long will we sit still for these asinine greedy corporate pimps and politicians who just can’t be satisfied with being very rich and still being moral, caring members of the human tribe that populates this planet. No, they’ve got to personally have more money and possessions than many small countries – selfishly amassing all of this at the expense of their fellow man.
Now their minions are posturing on the news each night about how they can’t agree on a way for the country to live within its means. Bullshit! They could care less about the goal and its outcome – because they’re going to get theirs either way. It’s all a big bluff. A charade. They’re the problem!
No, I take that back, we’re the problem – for allowing it.

Listen To The Glass Off