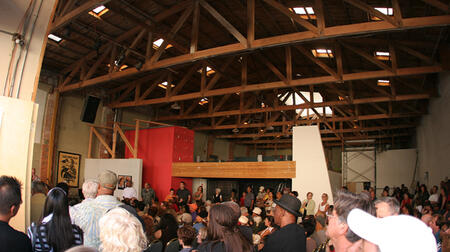 It might have been the cold night air or the fact that it is indeed November 1st (All Saints Day), but I had this amazingly vivid dream last night. I woke up still thinking about it — a strangely seductive feeling I couldn’t and somehow didn’t want to shake. I was back in the Midwest somewhere, the land of my birth, in some nameless bar visiting with a few musician friends I knew growing up. I had my arm around one of them and was congratulating him on keeping his music alive and vital all these years. Suddenly I looked up at a TV set and saw a club concert series program was about to begin. The camera was panning the location and it began to look strangely familiar. I saw funkiness — walls made from square pale green cement block, and a couple of yellowish wood pillars, a simple stage — and a show was just about to start. I know this place, “That’s dizzy’s!” I said, and suddenly the TV became a window in the door to the bar’s back room, “come on, you gotta check this out”, and I pushed thru the door and magically I was there, in there, in dizzy’s! I could feel an instant electricity in the air, you could tell something magical was about to happen. The place was packed and buzzing. No one was there to eat or drink and talk, they were all drawn there to be part of what was about to take place. There was a sense of focus, a palpable sense of excitement and expectation pervaded the space. People were gathered in groups, but it felt like we were all one. I looked around, there was the mezzanine. The whole place looked like a construction site (which it often was) and I looked up for the warm wood beamed rafters, but there were none — no ceiling or roof, the room was open to a warm cloud-scattered, star-filled sky. All of a sudden spontaneous singing broke out, some anonymous song with vaguely patriotic overtones, and everyone was singing, coming together in the center of the dusty floor. This is it, it’s dizzy’s. I knew the feeling, the energy. Spontaneous creation was about to occur and every person in the room could feel it, wanted it, needed it, longed for it, drawn together in restless anticipation.
I looked at the stage to see who was going to be performing, but there was no indication, all I saw was a couple of instrument cases, and an amp. It could have been any one of hundred and hundreds of shows. It didn’t matter, it was going to be special. That sense of unity and enthusiastic expectation, there could be no better feeling. Artists and audience intent on creating a unique moment together.
I wondered when it was going to start? I better go find out. I walked to the back looking for the performers. Under some stairs, there was an unpretentious closet-like green room crowded with unnamed musicians, and a couple of vocalists. I could tell that they were prepared, primed and excited too. “Let’s do it” I said.

Then I woke up. All morning the delicious memories of that energy stayed with me. I went for my run, not wanting to turn on my music player, wanting to keep thinking about the dream and the magic feelings. Finally, when I did turn on the music, I heard hand claps and bomp bomp bomp ba bomp bomp coming through my ear buds. Clapton and Cream’s I Feel Free was the song. The universe was speaking to me. I couldn’t help it, I put the song on repeat for the rest of my run.
“my mind wants to cry out loud
dance floor is like the sea
ceiling is the sky
you’re the sun and as you shine on me
I feel free, I feel free, I feel free”