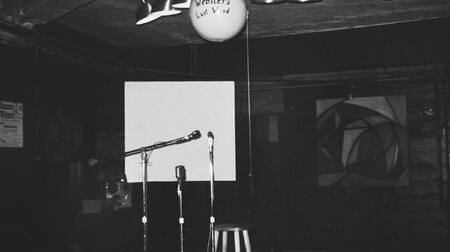 Part of the problem with being a performer is finding a sympathetic atmosphere in which to present your music; some place that allows the nuances & visual aspects of performance to develop & flourish. You can only get so far entertaining at benefits, rotary club meetings, & high school assemblies. So I hit upon the idea of starting my own performance space, one conducive to ultimate presentation & interaction with an audience. Walking around downtown Pekin, I happened upon a sidewalk stairway, off on a side street, leading down below ground to an old doorway, lit by a single naked bulb. I had no idea what was behind that door, but the scene had this intense Bohemian vibe. I went around the corner & found that it accessed the basement of the Arcade building; an old style office building with a unique arcade lobby. I sought out the landlord, & she took me downstairs. I couldn’t believe my eyes, it was perfect. Dark, dingy, labyrinthine, ceilings framed with water pipes, it had once been the offices & studios of local radio station WSIV. It had a large “L” shaped room with a focal point in the center (where I would build the stage) as well as a couple of sound proof studios we could use as green rooms. I struck an immediate deal to rent the basement for some nominal fee, with the understanding that I would clean the place out, thus increasing it’s value to the building’s owner. Then we set to work.

After cleaning & hauling out all the trash, we painted all the walls & pipes black. I called billboard companies & asked for scrap & unused pieces of old billboards. I was into collage art, but we would need some BIG pieces to work with to fill these expansive walls. We painted graffiti on the walls: my favorite was “God Is Dead – Nietzsche, 1889″ . . .”Nietzsche Is Dead, ha ha ha – God, 1900.” On the wall in the front room, where the entrance door was, I wrote the words to John Sebastian’s Do You Believe In Magic?: “Do you believe in magic in a young girls heart, how the music can free you whenever it starts, just go & listen . . .”

All of my sisters & brothers who were old enough, including my dad & mom, were involved in this project. We made tables out of 1″x12″x8′ shelf boards laid on cement blocks, & put those mesh-covered colored candles on them. The audience would sit on the floor, so we bought multi-colored square plastic pillows from K-Mart. My dad talked the manager into giving them to us @ cost (some ridiculous price like 99 cents a piece) because we bought 100 of them. We moved an old fridge & big coffee pot down there in a makeshift kitchen, built a stage out of plywood, & we were ready for business!

This organizational flurry of empowerment wasn’t completely new to me. As a grade school student, I used to put on carnivals for the neighborhood in our back yard to raise money for various charities. We’d have games of chance, plenty of balloons, homemade treats, even a fortune teller (usually my sister Patti in costume & turban behind a curtain). I must have watched too many “Our Gang” comedies on Saturday mornings!

On July 11, 1966, Webster’s Last Word Folk Theatre & Coffee House opened its doors. Webster’s (as it was affectionately known) struck a nerve & was an immediate success. Teenagers needed some place like this. Musicians, poets, & performers were lining up to perform for free. The buzz spread like wildfire; whole groups, even families started coming. It was just different, unconventional yet appealing. It was beat.

Once word got around, the head of the police department came down determined, I think, to shut us down.
It turned out he knew my father, a local attorney, who was standing in the back. Ever the diplomat, my father showed him to a seat on the floor right up front. He ended up staying the entire evening, & had a wonderful time. We never had a bit of trouble from the authorities after that.

That next fall I was to go to Angers, France to study for my sophomore year. While I was gone, my amazing family kept Webster’s going every weekend, to the delight of the local performers.