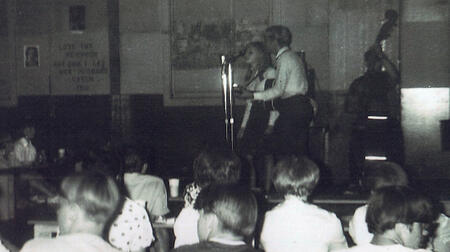 I was the oldest of 12 children, so naturally my passion for folk music spread to my younger brothers & sisters. But it was my sister Mary, 4 years younger than me, who seemed taken by it the most. Of course, it helped that she had this amazingly unique voice, honest & natural in timbre, as well as a great ear for harmony. I started encouraging her, working out songs with her, & teaching her to play guitar.

One night I called her up on stage to join me for a song or two. A month or so later, in August of 1965, the Illinois State Fair held a statewide Folk Song Hullabaloo competition. Lots of high-powered, banjo-pickin’, four-part-harmony groups from across the state laid it down in Springfield. But Mary & I, a fledgling brother & sister act from little Pekin, impressed the judges with our simplicity, personality, & blood harmony. We took home the first place Governor’s trophy, a check for $500, and an all-expense paid recording session in Nashville. The very next day, the Pekin Times put our picture holding the trophy on the front page.

That was the beginning of Chuck & Mary. We knew we had something special. Mary was only 15 years old, but she started learning guitar in earnest & matched my voracious appetite for all things musical, particularly acoustic music. Most importantly, she began to write her own songs. By the next summer, when the Webster’s Last Word Coffee house opened, we were a solid act.

I’ve added links to a couple of our earliest recordings. “Babe Can You See” was the product of our session @ RCA in Nashville for winning the state fair contest. WIRL in Peoria & WSIV in Pekin proudly played the song in regular rotation.

We recorded the JFK tribute “He Was A Friend Of Mine” a few months later direct to acetate with The Shaggs & some ND friends backing us up (the same afternoon as the Shaggs’ session in Osceola, Indiana)