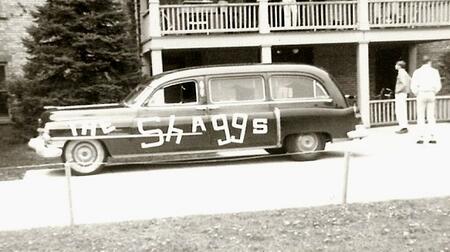 When I graduated from high school in 1964, I returned home to Pekin, Illinois to work for a year in order to save up $$ to attend the University of  Notre Dame, but I used to go back up to ND a couple of times a month on weekends to hang out. On one my first visits, a football Saturday in fall 1964, I walked into the Rathskeller below the student center to find the Shaggs set up and playing — Frank Krakowski, RayWheatly, John Hall (who later founded the group Orleans, penned the big hits Dance With Me & You’re Still The One, and is now a Congressman from New York) & one other guy named Joe. They blew me away. I had been playing bass in a local central Illinois teen band, Eddie & the Excels, but I went back & formed my own version of the Shags — with one “G”. They became very popular in the Peoria/Pekin area that year, culminating with a top 3 finish in the Battle of the Bands at the Illinois State Fair the summer of 65. The next year, September 1965, I enrolled at ND and looked up Frank K. Turned out he was in the same hall as me, Farley, and needed a singer since John Hall had left ND (willingly or unwillingly). All of a sudden, I was in the real SHAGGS & performing on Sorin Hall porch was now “my domain” on football Saturdays!

Another band, the Shamrocks, were our main competition for all the frat parties that were held almost every weekend at a place called the Laurel club on the other side of South Bend. It was far enough away from campus that the junior & senior class social organizations could rent it out, a floor for each class, & have bands, dancing & booze. It was a wild scene, great parties, girls dancing on the tables, guys doing the alligator on the floor. I had this 50-foot mic cord and I would wander the room & dance floor during certain songs. We had no cars at first, so the Shaggs would take 2 cabs there & back. Frank had it all worked out so all the equipment would fit in one cab & the 2 trunks (including his drums & the PA), & we would all cram into the other cab. Later, we saved up enough to get the hearse pictured above.

We had a lot of fun & performed in some unusual situations. I remember playing for a class event in the sand at the Indiana Dunes & once playing in transit on a train full of students bound for West Lafayette, Indiana for a Notre Dame-Purdue football game. When Stepan Center was built on campus, we became one of the main openers for concerts there. We opened for The Kingsmen of Louie, Louie fame (Frank’s dream come true – check out the picture of the Shaggs & the Kingsmen on the right), as well as The Supremes, the Buckinghams, the American Breed, Baby Huey & The Baby Sitters, etc.

The other new member of the Shaggs was Geoff Gillette, a freshman from Chatham, New Jersey, who has gone on to become one of the most respected live sound engineers on the West coast. We became close friends. That spring (April ’66), the Shaggs, in order to have something to put on “The Huddle” jukebox, recorded two songs, direct to 45 rpm acetate, at a place called Universal Audio in nearby Osceola, Indiana. The songs were Farmer John (one of our big crowd pleasers) and Too Dark For Day, a song Geoff & I wrote. Click on the titles to hear them in all their glory, salvaged from the worn out disc. Check them out!

Geoff & I were sort of a self contained duo & could sit in with any band & do our shit. I was a guitar player too, but stuck to tambourine/harmonica mostly with the SHAGGS. At the end of our freshman year, May 1966, Geoff and I delivered a drive-away out to San Diego at the urging of Denise Willett, a St Mary’s girl who lived in Pacific Beach. Geoff loved to surf, & we lived at the beach, a few blocks from where I now own a home, & would take our guitars down to the boardwalk & serenade passersby with Beatles/Stones songs. We also got taken down to Tijuana a few times, where we would sit in with the Mexican cover bands at all of the clubs along Avenida Revolucion & do a few songs in exchange for drinks (zombies). What a time!

For more information, you will find an 2002 interview from 60sgaragebands.com by clicking here

Here’s a sample songlist of some Shaggs material:
Walkin The Dog
Mustang Sally
Money
Farmer John
Midnight Hour
Shout
Louie Louie
Twist & Shout
Slow Down
Satisfaction
Cherry Pie
Time Is On My Side
The Last Time
Tell Me You’re Comin Back To Me
Kicks
Good Lovin
You Better Run
Devil With A Blue Dress On
Wooly Bully
Dirty Water
Land Of 1000 Dances
Play With Fire
I Got You Babe
Land Of 1000 Dances
Mony Mony
Shakin All Over