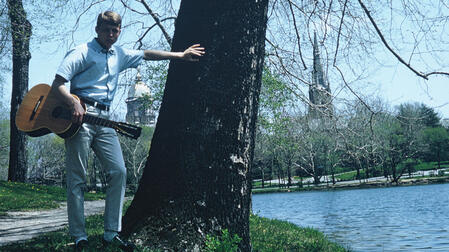 As a junior in high school @ Holy Cross Seminary, on the campus of the University of Notre Dame, I formed & started performing with my first folk groups: The Newports & The Brandywine Trio. I was heavily into Peter, Paul & Mary, The Kingston Trio, as well as researching Alan Lomax’s collections of American Folk Music & icons such as Pete Seeger & Woody Guthrie. At the same time I was beginning to write my own songs. Being on campus allowed me to spend some evenings hanging with & learning from the Notre Dame students who were into folk music. The Four Winds used to rehearse in O’Shaughnessy or the basement of Washington Hall. I would attend their rehearsals & watch them arrange material. I was blown away by their creative use of four-part harmony. Another big influence was Don Connors, a guitarist/songwriter who lived in Keenan/Stanford. He introduced me to guitar inversions & many great songs.

Here’s a sample song list from a typical Newports’ performance: