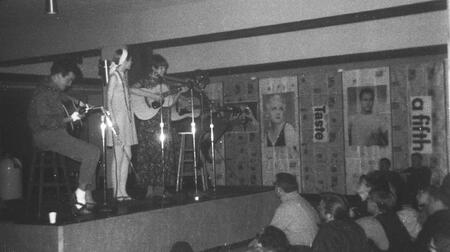 The year before, while I was studying in Angers, France, I was a part of a tight knit group of 45 creative American students. We were very close, & used to hang together all the time. I loved that sense of community, & decided to try to bring it back to Notre Dame, & vibe it to the whole campus. We needed a place to center creative culture: it was time to bring Webster’s to South Bend. I struck a deal for the top floor of an abandoned former speakeasy located right downtown near the river. Being a struggling college student, it would have to serve as my pad, as well as a performance space. It had no windows, of course, & was always pitch black inside. You walked halfway down an alley, climbed a couple steps up a non-descript porch between two buildings, & knocked on a green metal door. I emptied everything from the top floor & stuck it downstairs. Once again I painted all the walls black & covered them with posters & billboard collages. The stage stretched along the far end. A friend who was an engineering major, Bill Beyer, designed a red & black checkerboard floor which had the squares converging on the stage in an ‘Alice in Wonderland’ fashion. He & I painted the whole thing in one 20 hour session, while listening to the Cream’s ‘Disraeli Gears’ over & over. Ah, the 60’s!

There was no charge for admission or coffee. I constructed a donation box out of long lighted glass tubes that had formed the decorative ends of the old bar that was stored downstairs. It sat at the entrance, & everyone just put in what they could. Amazingly it worked, & I was always able to make rent & expenses.

The space opened in January of 1968. Anything & everything was fair game there: experimental plays, poetry, student films, lots of folk music. About a month after I opened, the Stone Poneys were in town to do a concert at the Morris Civic Auditorium a few blocks away. After their show, Linda Ronstadt & Bobby Kimmel dropped by to perform a memorable late night set.

The students as well as the faculty seemed to enjoy the fact that the space was away from campus. There were literally no hours or closing time, so quite often I had to suggest going out for breakfast together, just so I could come back later & get some sleep.  Lucky it was always dark in there.

The girls from St. Mary’s approached me about bringing the concept to their campus. We convinced the administration to let us use the basement of O’Laughlin Auditorium, with the provision that, if it worked, it would become permanent the next school year. It was a rather non-descript space, & they wouldn’t allow us to do anything permanent to the walls. So we covered them with butcher paper, & put the posters & billboard collages on the paper.

This was spring of 1968, & there was a flurry of activity surrounding the presidential primaries, students working for either Eugene McCarthy or Bobby Kennedy. I myself was working for McCarthy, singing at appearances & rallies. Dustin Hoffman was in town stumping & we got him to come by & cut the ribbon the night the coffeehouse opened. And that first Sunday night, Phil Ochs, in his worn leather jacket & dirty jeans, performed a set I’ll never forget. The revolution had indeed come to Websters.