My good friend, filmmaker Rob Amato, was always brain storming creative visual projects.  He regularly purchased old 16 mm film on ebay – the older the better –  just to immerse himself in the visual vibe of times gone by.    While screening some vacation films taken of Venice in the early 1930’s, it struck him how an instrumental I had written, Mahatma (from the Beat.itude album), seem to fit and enhance the film’s mood.  So he and his compatriot, Alex Rossner, took my track and started cutting scenes from the film to it. This grew into the idea of including me, playing to a screening of the film, complete with an old 16 mm projector, and having images from the screening interact with the cuts from the film itself.  All very creative stuff.  We did the filming/screening late on Monday night – April 16, 2001 – at the original dizzy’s warehouse space.  Here is the result. 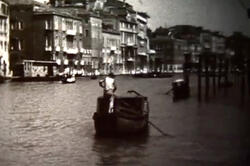