My friend filmmaker Rob Amato came up with this idea to try to film a live performance of a song out in the middle of nowhere.  I was game & pulled in my audio specialist buddy Peter Carpentier to see if he thought such a thing was possible.
There were a couple of obvious challenges.   The cameras could work on battery power, with extra charged batteries handy.  But even though the Adat recording equipment & preamps would fit in a van, we would need to bring our own generator to power them.  And the van would have to be far enough removed from the performance that the sound of the generator would not be a factor in the recording.  That meant some long cords. Also all of the instruments would have to be acoustic, for the same reason.

We wanted a location that was remote enough that it would not attract undue attention. Rob wanted to do the filming on the sly, without getting extensive clearance permissions.  So we spent a day driving the back country down near the Mexican border.  We happened upon a likely spot, an outcropping of boulders a couple of miles East of  the desert town of Jacumba, between interstate 8 & the Mexican border.   A few days later, on the evening of Nov 22, 1999, we caravaned out to the Jacumba Hot Springs Inn. There were seven of us: filmakers Rob Amato & Alex Rossner, audio specialist Peter Carpentier, myself,  & Rob Thorsen bass, Patrick Armenta percussion, & Troy Jennings saxophone.  After a bit of rehearsal & a soak in the hot sulpher springs pool, we went to bed early because we planned to rise @ 4AM – we wanted to catch the dawn & the sun rising over the mountains in the East.  We set up in the half light of dawn & as the sun peeked over the mountains, recorded the song.  As the morning passed we shot some close-ups & video effects to cut into the take.
It is amazing to me that, with a little planning & effort, you can sometimes accomplish whatever you can imagine. 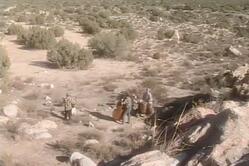