It was time to take some chances with my live performing.  I was writing some interestingly edgy pieces that bordered on theatre, so I decided to explore what I could do with the warehouse space & some visual aids.  The concept for the performance was to put myself into 11 different unrehearsed musical combinations, & work solely from sketches or outlines.  I used slides & video projections, a bit of scenery, & a wonderful cast of musicians who flew blind into what I had set-up, but did what jazz musicians do – create & improvise in the moment!  The performance began in the pitch black dark with the thundering tones of Asian gongs, & my voice reading one of my poems called “it’s time”.  I incorporated a bit more spoken word into this show – a few pieces with just drummer Duncan Moore & percussionist Patrick Armenta‘s improvising along, sort of like bohemian hip hop.

Equally important to this spontaneous combustion was the role of filmmaker Rob Amato & San Diego City Access TV cameraman Rick Bollinger, who captured video images, again with no run-throughs or rehearsals.  They just set up & rolled tape.  From time to time, I saw Rob out of the corner of my eye, darting back & forth with his hand-held, & making adjustments to the stationary cameras.  You’ll find a couple of videos they shot from this show on the video page (Anesthesia & Nothing Ever Stays The Same).  One of the most spontaneously colorful was the live video of Swallow Life you see on the right.  I took the rhythm bed that Larry Mitchell had created for the original demo recording & played it on a Mac laptop – then projected the iTunes screen saver over the performance.  That’s Steve Feierabend on the tenor saxophone & Dave Curtis bass. The Mac G4 improvised along with the group, throwing ever-evolving digital creations over the scene. The startlingly moody images tell the story & capture the vibe of the evening. 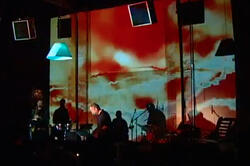