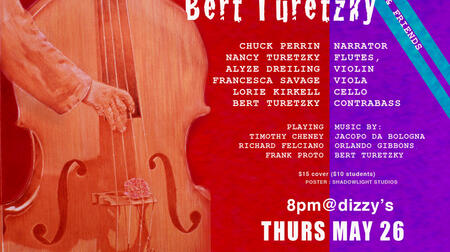 Being an acoustic guitarist, I am partial to the rich tones and expressive percussive qualities of the contrabass. San Diego happens to be home to some world renown bassists, and the mentor to most of them is UCSD Professor Emeritus Bert Turetzky. He has been a key figure in the renaissance of the contrabass.  Since 1955 more than 300 new works have been written for, performed by and recorded by him, making him the most frequently-recorded contrabass soloist in America. He, almost singlehandedly,  has taken the contrabass from its traditional role to assume the position of a major solo instrument. He also is a kindred spirit in his love of spoken word, beat and dada poetry. So I was honored to be a part of his dizzy’s performance, Thursday evening May 26, 2011. I provided the dramatic narration for a wild piece written for bass and spoken word that pays homage to the great jazz bassist Charles Mingus.