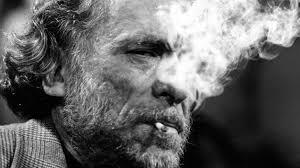 f i r s t I saw the tip of his lit snipe
he was sitting on an old ratty corn-colored couch cushion
propped up against the side of a dumpster
& as soon as he saw me notice him
he farted
& I laughed
“hey, hank . . .
where the fuck you been, man?”