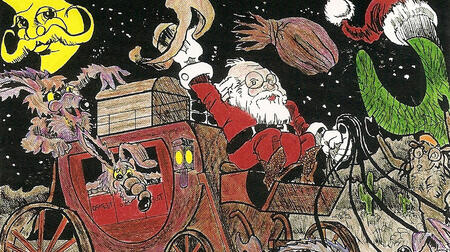 In the early 1990’s, many of us in the San Diego acoustic music community were grappling with the ever-evolving recording technology, striving to find some way to capture the intimacy and spontaneity of our musical performances in a way that was fun and financially feasible.  Along came a guitarist named Michael Tomeo, who had purchased a DAT recorder and was pioneering a relaxed approach to making natural acoustic sounding recordings in his home.  He hit upon the idea of doing a Christmas album project (since it did, in fact, come around each & every year) & he solicited some of us to write, record, & contribute tracks to it.  I was anxious to get something into the digital domain & in the midst of creating music for the planned Beat.itude project – so writing an offbeat song about an alternative Christmas just came naturally.  I enlisted the 2 musicians I had been working live with – Arthur Fisher & Patrick Armenta – & we went over to Michael’s apartment & recorded our track as Chuck Perrin & the holy barbarians.  The other performers on the CD were John Katchur, Calman Hart, Joy Eden Harrison, Byron Nashe, Elizabeth Hummel, Joel Rafael, Ryan McAnany, Mary Dolan, CJ Hutchins, & Dandelion Wine.  Because Michael lived in the San Diego neighborhood of Tierrasanta, the CD was called “Tierra Santa” – & it has since become something of a collector’s item.