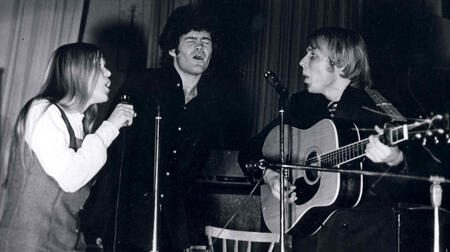 Even though my sister’s Mary’s been gone almost 9 years now, I think of her at every dizzy’s show when I look up and see the wondrous collage of jazz icons she made. Ever since she gave it to me, it has hung on the left side of the dizzy’s stage where it has fascinated countless musicians, fans and students who try to pick out and name the legendary performers that are pictured. You’ll find a photo of the collage in the gallery top left – click on it =>
Today is Mary’s birth day, and I’m remembering a performance we did this time of year in 1969 – back in a time when people actually found their music by listening to the radio. The most listened to station in Central Illinois at the time was WIRL – the mighty 1290. The station employed a hand-picked team of what were known as on-air personalities or DJ’s. On Sunday, November 2, 1969, the WIRL Good Guys presented the first annual St. Jude Mission Impossible Show – gathering a dozen National and local recording acts on the stage of Peoria’s Spaulding Auditorium to raise money for Danny Thomas’ St. Jude Research Hospital in Memphis Tennessee.
Mickey Dolenz of the Monkees was the MC for the show. He performed some of his Monkees hits and asked Mary and I to join him to sing some Beatles’ covers. Also on stage that day Johnny Nash sang “Hold Me Tight”, The New Beats did “Bread & Butter”, R B Greaves “Take A Letter Maria”, The Original Caste “One Tin Soldier”, and Evie Sands sang her new hit “Any Way That You Want Me”. The set Mary and I did included “Babe Can You See” – the track from our first album that WIRL was featuring.
We had a blast that day, being a part of the show and hanging out with Mickey and the other performers. But the highlight of the show for Mary was Evie Sands’ riveting performance. Evie’s stage presence, energy, and vibe was a real inspiration for Mary, and that night she became a lifelong fan. A couple years later Evie had a hit with a song written by Dennis Lambert and Brian Potter – “You Brought The Woman Out Of Me.” Mary particularly identified with that song – so much so that a few years later she recorded it herself. Even though it was never released, Mary demonstrated that she could rock it too! You can check it out by accessing the player at the top of the page.