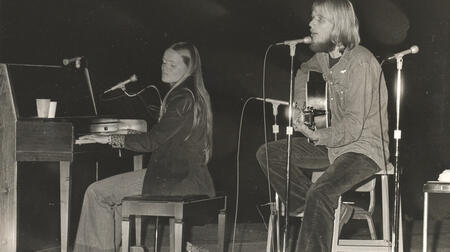 In the fall of 1970,  we became associated with The Bitter End College Coffee House circuit, coordinated by a woman named Marilyn Lipsius. They sent us on a tour of college campuses, a week at each school.  We would stay at the school,  interact with the student body & social commission, and perform every evening in the school coffee house or student center.  We started with a 9 week tour of Ohio schools in late September, October, & November.  It was an opportune  time to be in that beautiful state, with the autumn trees in full colorful bloom.  In January we moved into the South, Kentucky & Tennessee.  Most of these songs were taken from a January concert @ Southwestern College in Memphis.