Well, it was the Ides of March – Saturday evening March 15th – when we gathered at the place where music is always treated with respect. Of course I’m talking about dizzy’s. I had a few new songs and a yearning to dig back into the material from 1995’s Beat.itude album to explore some cool new groove-oriented arrangements. The vibe was acoustic, spare and open, driven by my Martin D35 (the one I bought new in 1968). Joining me were five sympathetic musician friends: upright bassist Rob Thorsen, bongo specialist Patrick Armenta, tenor saxophonist Daniel Jackson, and Gospel vocalists Arnessa Rickett and Carmelia Bell.
We performed casual, in the round, sort of like a rehearsal. It was a fun, magic night of music, and here are the songs we performed:
where the wind winds blow
out here on the edge
touchstones
bird lives!
coconut grove / highway to hell
scotch & soda (cp solo)
trustville
unplug
nothing ever stays the same
hiding in plain sight
saturn (cp solo)
anesthesia

If you look right you’ll find some videos – remembrances of the night courtesy of videologists David Foster and Steve Laub, and audio specialist Ross Goldman.
Thanks to everyone who came to the show. 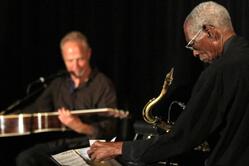 Watch Nothing Ever Stays The Same (live 2014)